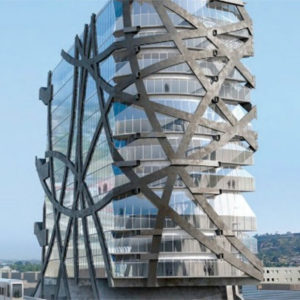 Creative office is going high-rise. The most popular niche in office is usually reserved for low-rise buildings and sprawling campuses, but developer Samitaur Constructs and architect Eric Owen Moss has unveiled the Wrapper, the first creative high-rise property. The 16-story, 169,000-square-foot tower in Los Angeles, at the border of Culver City, has open floor plans with varying ceiling heights from 13 feet, 16 feet, and 24 feet high as communal amenities like deck space with unobstructed ocean, mountain, and city views. To find out more about the project, what this means for creative office and how tenants are responding, we sat down with the developer for an exclusive interview.

GlobeSt.com: What was your vision for the project?
The team behind the Wrapper includes the developer Samitaur Constructs (Fredrik and Laurie Smith), architect Eric Owen Moss and exclusive marketing agent First Property Realty Corporation (Mike Geller and Gabe Brown). The team has worked together for over 18 years designing, constructing and leasing over 500,000 square feet of the most unique creative office projects in Culver City and Los Angeles for such users as Nike, The Tennis Channel and Ogilvy & Mather. Most of the creative office buildings have been converted warehouse projects. Our vision for the Wrapper is to incorporate our knowledge from tenants leasing single story buildings and apply it to a hi-rise format. Creative tenants want distinctive architecture, natural light, high ceilings, column free space and outdoor common area, all of which have been incorporated into the Wrapper.

GlobeSt.com: How is high-rise creative different than creative campuses, and what are the benefits?
The hi-rise is a creative campus, only vertical. It will offer its users incredible ocean, city and mountain views that are typically not found in low-rise creative campuses. The outdoor ground floor common area of creative campuses has been replaced by two unbelievable rooftop decks, which are available for tenant use. The Wrapper will also offer a suspended loft area on three of the floors, which includes a 24-foot-high ceiling.

GlobeSt.com: What has the responses been like from tenants, and what is your occupancy?
Our marketing program has very recently commenced. No leases are executed, but we are negotiating lease terms with several prospects for an anchor tenancy. Tenants are attracted to the project for its central location on the Westside (midway between Downtown Los Angeles and Santa Monica), its adjacency to an Expo light rail station and Ballona Creek bike path, and the major architectural statement of the project.

GlobeSt.com: How much did the development cost, and how did you fund the project?
The cost of the project is still being finalized, but it is suffice to say the construction is expensive. The “ribbon” exoskeleton of the building serves as the structural system and is much more expensive than typical column and beam structures. The project is being funded through owner equity and bank financing.