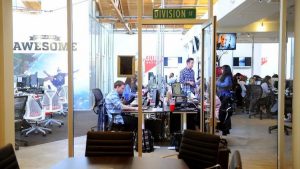 First Property Represents the Landlord in the Expansion of Jukin Media

Jukin Media, the company behind viral sensations such as Pizza Rat and Chewbacca Mask Lady, will nearly double its office space in Culver City to produce more original programming off its trove of user-generated video clips.

The company, which buys the rights to amateur videos that are shared widely, expects to see a greater percentage of its business shift toward hosted shows that showcase those videos, not unlike an “America’s Funniest Home Videos,” but for the social media set.

To accommodate that strategy, the company plans to expand its 16,000-square-foot office at Jefferson and La Cienega boulevards with an additional 14,000-square-foot production space next door.

The new facility, which will break ground Oct. 1, will include two sound stages, sound mixing suites, video-editing suites, a screening room and a green room. Jukin, which rents all its space, expects to move in by mid-November.

A studio will allow Jukin to craft more polished programming and secure its own production space at a time when competition for soundstages in Los Angeles is fierce.

“For us, building a studio has always been part of our long-term plan,” said Jonathan Skogmo, Jukin’s founder and chief executive. “This is a great time to be a content producer.”

Culver City is a hotbed for entertainment and technology companies. Home to Sony Pictures Studios, the city is also the site of digital brands such as Fullscreen, Maker Studios and Crackle. WeWork also has a sizable shared office space within walking distance from Jukin.

Demand for video content is surging to feed the plethora of competing platforms such as Facebook, YouTube and Snapchat, as well as new digital ventures from media giants such as Verizon and Comcast.

Jukin has already produced some original programming, including “Fail Army,” which is shown in 200 markets worldwide; “Awesome Pet Thoughts,” which appeared on Comcast’s digital platform, Watchable; and “World’s Funniest,” which aired on Fox with host Terry Crews.

Jukin recently announced that one of its videos under the “People Are Awesome” franchise was named the most viewed video uploaded on Facebook with 384 million views and counting.

Skogmo, who launched Jukin out of his two-bedroom West Hollywood apartment in 2009, says the company has been profitable for years, but declined to disclose its revenue numbers.

Unlike many other tech firms, Jukin has taken minimal outside investment to ensure control of the company. Its so far raised $6.5 million, counting Samsung, Maker Studios and veteran Hollywood executive Peter Guber among its investors. Its most recent investment came from Singapore Press Holdings, an advertising and media company, which gave Jukin $2.5 million last summer.

Jukin’s core business is acquiring the rights to user-generated videos, offering owners of the clips a lump sum or a revenue sharing plan. An algorithm helps employees discover clips online that have the potential to go viral. Once acquired, the clips are then licensed to advertisers or TV shows.

In addition to its Culver City headquarters, Jukin maintains offices in London, New York and Sydney and operates a 24-hour search for viral fodder. The company has added 45 new employees in the last year to bring its workforce up to 175.

Among the most popular clips in Jukin’s library are “Brothers Convince Little Sister of Zombie Apocalypse” and “Kicked in the Head by a Train.”