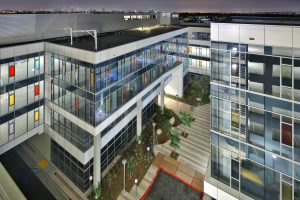 Quibi, the digital video start-up backed by studio mogul Jeffrey Katzenberg, is expanding its footprint in Hollywood with new headquarters that will take up two floors of new office space.

Quibi is short for “quick bites” of video and will launch a service next year with videos lasting 10 minutes or less. It is headed by former Silicon Valley tech executive Meg Whitman, who oversaw Hewlett-Packard and EBay.

The company agreed to occupy 49,000 square feet in an office complex at 959 N. Seward St. in the Hollywood Media District and could move in by February. The two-building complex is known as Hollywood 959 and is pitched to entertainment industry tenants.

The headquarters location “places us in the center of the film industry and reinforces our commitment to Hollywood,” Whitman said in a statement. A Quibi spokesman declined to say how many employees will work there.

Quibi has raised $1 billion in funding. Major studios like Walt Disney Co. and Warner Media will create content for the new service, and high-profile directors including Guillermo del Toro, who recently won an Academy Award for best director for “The Shape of Water,” is working on a zombie-related story for Quibi. The service, which will compete against other streaming video services, will charge a monthly fee of $5 with ads and $8 without ads.

Getting consumers to sign up for an unknown service in a marketplace full of popular streaming platforms like Netflix and YouTube will be a challenge. But Quibi believes there is a demand among consumers for shorter videos.

“We’re not naive about what we’re doing. We know how hard it is,” Katzenberg said during a session at a Vanity Fair conference this month. “Doing this falls somewhere between improbable and impossible.”

Other companies like Santa Monica’s Snap are delving into shorter-form video.

“There is clearly an appetite for short-form” content, said Michael Pachter, a managing director of equity research at Wedbush Securities, adding that young people already go to YouTube several times a day to look at short videos.

Terms of Quibi’s 10-year lease were not disclosed, but landlord J.H. Snyder Co. is asking for about $4.50 per square foot per month in rent there. Quibi is already in temporary quarters in the complex as tenants of co-working space provider Serendipity Labs.

Hollywood’s office market has experienced a renaissance in recent years as entertainment, media and tech companies expand or set up shop. The new buildings are part of a construction boom in which 1.6 million square feet of office space has been delivered to Hollywood since 2014 by Hudson Pacific Properties Inc., Kilroy Realty Corp., J.H. Snyder Co. and other builders, according to real estate brokerage JLL.

There are 12 properties in the pipeline totaling an additional 1 million square feet that will mostly hit the market in 2020. Among them is Epic, a 13-story tower being built on Sunset Boulevard by Hudson Pacific. This month steaming giant Netflix agreed to rent the entire 328,000-square-foot building when it is completed two years from now.

J.H. Snyder Co. senior partner Jerry Snyder said the Quibi lease and another pending deal will bring occupancy in the complex to 80%.

The new Quibi office is within walking distance of much of Hollywood, noted Whitman, who has remarked on the change of scenery from Silicon Valley. At the Vanity Fair conference, Whitman said the cultural difference between the two areas is like “Paris and Berlin.”